The United States was recently hit with a heatwave of epic proportions, leaving many areas ten degrees hotter than usual — or even more. One of the most common complaints during these weather extremes is that it becomes more difficult to sleep in the balmy temperatures. There is a great deal of lore regarding body temperature and sleep, with many cultures believing that it is better to sleep in a cold room. New research into the link between body temperature and the circadian rhythm suggests that people are not imagining it when extreme temperatures leave them exhausted and sleepless.

The Interaction Between Body Temperature and the Circadian Rhythm

Like many aspects of human health, our body temperature is controlled by our circadian rhythm. The suprachiasmatic nucleus (SCN) of our brain is the coordination center of our sleep-wake cycles, signaling a variety of physiological processes that are crucial to our well-being.

All warm-bodied animals experience slight changes in body temperature as we go through our days. These are very small, often less than even one degree, but have a powerful effect. Like many daily fluctuations, these small changes in temperature are signaled by the master clock in our brain.

A recent study on patients with brain injuries underscores the relationship between temperature and health. Researchers looked at a group of patients who were in various levels of coma following a traumatic brain injury. They tracked their body temperature as well as their level of response to their surroundings.

Patients who had temperature fluctuations similar to those seen in healthy people scored better on measures of emerging consciousness, indicating that they were in a lighter state of coma.

Researchers then exposed eight patients to bright light at targeted parts of the day, simulating daytime light patterns. Two of these patients showed an improvement in response. This suggests that some people in comas may be helped by treatments that encourage their circadian rhythm to get back on track. 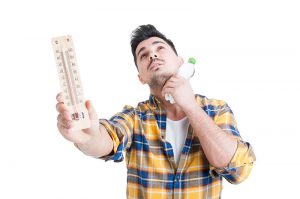 Scientists note that there are several areas yet to be explored in the relationship between circadian rhythm and recovery from brain injury. This study was extremely small, so its findings may not apply to all people in comas. In addition, the improvement was measured by performance on a coma scale rather than by objective findings such as imaging. Nonetheless, helping the circadian rhythm get back on track may give people with these devastating injuries a better chance at recovery.

Should You Be Sleeping in a Cold Room?

Are the old wives’ tales about sleeping in a cold room true? Study results are unclear. Researchers note that people sleep best when their core body temperature is low. Our temperatures are generally at their lowest during REM sleep, then begin to rise just before we awake. Core temperature increases slightly throughout the day until mid-afternoon, when we begin a slow cooling process that will continue until we are deep in slumber.

In fact, people who experience their nightly dip in body temperature at a later hour are much more likely to suffer from insomnia. Many scientists theorize that these people have difficulty sleeping because they cannot lower their body temperature as quickly as other people. Conversely, many people who wake up at very early hours experience a rise in temperature long before those of us who wake later. For these people, keeping their bedroom cold may indeed be an effective way of improving sleep.

However, the dip in core body temperature is not always related to the temperature of the room in which we sleep. Because we are warm-blooded creatures, humans can generally maintain a stable core temperature even within a wide range of ambient temperatures.

Although we know the basic facts about the interaction between body temperature and the circadian rhythm, there is still a great deal yet to learn. Much research on the circadian rhythm has looked at how light levels interact with our health. Temperature, however, may be just as important. Understanding more about the interaction between our environment and our internal clocks may lead to new technologies and treatments to help us be as healthy as possible.