Sight is important but it is not the only role of the eye. Research has shown that the eye’s role in circadian rhythm entrainment is greater than we previously believed.

Our eyes are an important part of perceiving and adapting to our environments. We use our eyes to navigate the world in a variety of ways. From appreciating a beautiful piece of art to maneuvering in traffic, vision is one of the most important senses for many people. Visual learners, people who learn best from seeing information in a graphic form such as a chart, make up 65 percent of the population. However, we do not just learn facts using our eyes; the body also “learns” about what time it is and what tasks we should be completing. The eye’s role in circadian rhythm entrainment is crucial to setting the time on our internal clocks.

More Than Sight: The Function of Your Eyes

Your eye is a complex organ made up of several parts, each playing an important role. The cornea is a clear protective piece covering the inner structures such as the iris, which is a colored ring surrounding your pupil. The iris dilates or constricts to let just the right amount of light into your eye while the cornea focuses images. Just behind your iris and pupil is the lens of your eye, which flattens or curves to further keep images in focus. At the back of your eyeball lies the retina, which perceives light and darkness and sends messages about images to vision centers in your brain via the optic nerve.

The retina is the most complicated part of the eye, made up of rods, cones and intrinsically photosensitive retinal ganglion cells, often abbreviated to IpRGCs. Rods and cones perceive light and color that we perceive as images once these signals are processed in the brain. Intrinsically photosensitive retinal ganglion cells play a very different and equally important role in our eyes. They pass messages about light levels to the suprachiasmatic nucleus of the brain, the master clock of our circadian rhythm. Malfunctioning IpRGCs have been implicated in a variety of diseases, including sleep disorders, migraines and disorders associated with the circadian rhythm such as seasonal affective disorder. 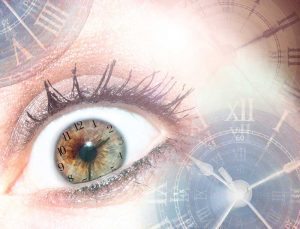 The role of rods and cones in the eye has been known for decades, but the presence of intrinsically photosensitive retinal ganglion cells in humans has only been known for 11 years. Although these neuronal cells make up only around 0.2 percent of the cells in our retinas, studies have shown that they are crucial to maintaining the eye’s role in circadian rhythm entrainment. They act as a light meter, which is important in setting and regulating our internal clocks.

Without the influence of light, the human circadian rhythm lasts longer than 24 hours. People with malfunctioning or absent IpRGCs have an internal rhythm that does not align with that of the daily rotation of the planet. They find themselves sleeping at odd and constantly changing hours, making it difficult to keep a job or keep up with social obligations. This disorder, called non-24 hour sleep disorder, has also been found to contribute to a lower immune system and other serious physical illnesses. 70 percent of those who are completely blind have this disorder, but it also affects many sighted people. People can have serious disorders that affect rods and cones while leaving IpRGCs intact, or vice-versa. Interestingly, almost a third of people with complete vision loss still have the neuronal cells in the retina needed to maintain their internal clocks.

Understanding the circadian rhythm is a complex task because our internal clocks are intertwined with every other system in the body. However, understanding is the first step in developing more effective treatments. New discoveries are allowing scientists to develop innovative therapies that treat the root cause of serious disorders such as non-24 hour sleep disorder and help more people to live in sync with our world.