Health-supporting, quality sleep involves five sleep cycle stages that repeat throughout the sleep period. However, in today’s fast-paced, always-connected world, it has become all too common to neglect sleep. We are in the throes of a worldwide “sleeplessness epidemic,” and the outlook is dire: Insufficient sleep and sleep cycle disruption can hold serious consequences for productivity, health and cognitive function. 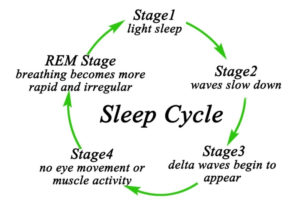 The first four stages of sleep are classified as non-REM sleep. REM stands for the rapid eye movement that characterizes the fifth stage of sleep.

When a person is getting enough sleep, these stages repeat four to six times per sleep period. It takes about 90 to 110 minutes to complete a full, five-stage sleep cycle. Each sleep stage has specific qualities and, while there’s still a lot that remains unknown about sleep, scientists have been able to pinpoint certain important body and brain maintenance tasks that are performed during each sleep stage. These include memory consolidation, muscle repair, growth and the regulating of hormones, which play a role in such things as mood and metabolism.

Insufficient sleep has become such a widespread problem that health officials have deemed it to be a public health threat. This is because of the way it disrupts the fundamental regulating systems of the body, including the circadian rhythm. Circadian rhythm disruption is connected to a wide range of health issues and chronic diseases. Insufficient sleep is associated with an increased risk of type 2 diabetes, obesity and cardiovascular disease, all of which are also associated with metabolic system disruption.

High blood pressure, heart disease, stroke, decreased immune function, obstructive sleep apnea (OSA) and other respiratory issues are also connected to insufficient and poor quality sleep. So, too, are poor memory function, decreased concentration, reduced ability to perform complex mental tasks and an increased risk of depression and mood disorders. For optimal physical health and cognitive performance, it’s essential to get enough sleep and to reduce the disruption of the sleep cycle stages.

Transitioning From Wakefulness To Sleep

The first stage of sleep begins the process of easing the mind and body from wakefulness into sleep. In this stage, breathing begins to slow and becomes more regular as the brain starts shifting away from busy beta waves to slower alpha and more meditative theta waves. The muscles start to become less active, and the heart rate decreases.

During this period of slowing muscular activity, there can be occasional muscle twitches, leading to the common sensation of falling that can jerk a person nearly back to full wakefulness. In this first sleep stage, waking is still easy, especially with environmental disturbances such as light or sound.

Sleep stages three and four are the deep sleep cycles where vital body and brain maintenance take place. During stage three, delta waves begin to appear, soon transitioning to the full delta waves that characterize stage four sleep. Body temperature is at its lowest, heart rate is slowest and breathing is deepest and most regular during these stages of sleep. It can be difficult to wake someone in the deep stages of sleep, and when woken, that person is likely to be groggy for up to 30 minutes or so.

It is during deep sleep that physical healing takes place, along with the detoxification of the brain and the re-energizing of the immune system. Metabolic system balancing, including blood sugar and hormonal balancing, takes place during this period. Emotions and memories, including things learned and the day’s experiences, are processed and filed for later retrieval. Making up as much as 23 percent of a full night’s sleep, deep sleep is critical to health and well-being. The deep sleep stages are longer during the earlier cycle repetitions, growing shorter as the repeating cycles move towards the end of the sleep period.

A Category Of Its Own – REM Sleep

Making up about 20 to 25 percent of a healthy night’s sleep, REM sleep differs from all of the other states. In REM sleep, the brain is almost as active as it is when awake. Breathing can be rapid and shallow. There’s plenty of eye movement, although the other muscles of the body are typically prevented from strong movement, aside from the occasional twitch. This is the dreaming stage, and the immobilization of the muscles keeps sleepers physically safe during their dreams. The REM stage also plays a role in memory consolidation

Toddlers need up to 14 hours of sleep daily. Young children should sleep up to 13 hours a day, and older children 12 hours. Teens need 8 to 10 hours of sleep per night, with adults ranging between 7 and 9 hours. This allows sufficient time for the optimal sleep stage repetition that is so essential to physical health and cognitive function.