Liver cancer is a serious disease that affects about 8,000 people only in germany, but is an worldwide problem. Men are three times more likely to be affected than women, with an average age of onset of 69 years. 11 percent of people with the illness do not survive the first five years after diagnosis. Therefore it is important to develop innovative treatment methods. According to current research, the body’s internal clock may play a crucial role in the fight against certain types of liver cancer.

The liver is one of the most important organs in the body as it performs a number of vital functions in the body. It not only ensures proper detoxification, but also converts nutrients from the daily diet into substances that the body can use. It is also involved in blood clotting, digesting fats and controlling blood sugar levels. The liver is the only organ in the body capable of regrowing. And: The liver has its own circadian rhythm.

The internal clock, also known as the circadian clock, is an intrinsic 24-hour timekeeping system that works in all cells of the body and regulates sleep, metabolism and other vital bodily functions. In the liver, the circadian clock regulates the metabolism of drugs and energy sources, including glucose, lipids, and proteins. Research also shows that the liver is not autonomous in metabolizing fat and that it is a muscle that sends the message that it’s time to turn on fatty acid metabolism and how to do it.

Researchers at the University of Texas Health Science Center at Houston have succeeded in inhibiting the growth of liver cancer in experiments with mice by manipulating the circadian clock at the cellular level. The study focused on hepatocellular carcinoma (HCC), the most common human liver malignancy and the second leading cause of all cancer deaths from malignancies. Hepatocellular carcinoma is associated with fatty liver disease associated with obesity. 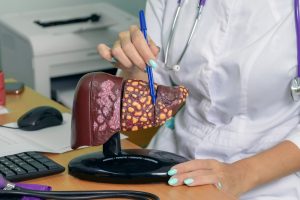 The researchers identified a malfunctioning protein that inhibited the expression of a key circadian transcription factor and blocked a tumor suppressor’s ability to carry out its normal 24-hour cellular functions. When the researchers forced the tumor cells to re-express the deficient circadian protein, the tumor cells died. These results suggest that targeting the circadian clock in HCC could be a promising treatment for HCC tumor growth and progression.

Alarmingly, hepatocellular carcinoma (HCC) is on the rise both in the US and worldwide. For this reason, physicians are specifically looking for new treatment methods. Recent studies have provided clues to a possible target: the circadian clock proteins in cells, which help coordinate changes in bodily function throughout the day. But most of this research only points to an indirect link between circadian clock function and HCC, for example the observation that cells collected from patients with liver cancer disrupted the circadian rhythm.

Research from the Keck School of Medicine, published in the journal Proceedings of the National Academy of Sciences, highlights how cancer cells engage the circadian clock machinery to divide and spread. First, the researchers showed that two key clock proteins, termed CLOCK and BMAL1, are essential for liver cancer cell replication in cell culture. If CLOCK and BMAL1 are suppressed, the replication process of the cancer cells can be interrupted. As a result, the cells begin to die (apoptosis). This is precisely the goal of modern cancer treatments; destroying cells and preventing them from dividing and spreading further.

The scientists also tested their findings in vivo. Mice injected with unmodified human liver cancer cells induced growth of large tumors, while those injected with cells modified to repress CLOCK and BMAL1 showed little or no cancer growth.

This research is groundbreaking in stopping the spread of liver cancer because understanding how cancer cells affect the circadian clock is the first step to develop new treatment methods. However, more research is needed to elucidate the exact mechanisms involved in cancer development, such as the P53 gene, which helps prevent cancer growth. Mutations in this gene have long been associated with an increased risk of certain types of cancer.