Watching TV at Night Can Be Detrimental to Your Health

Many Americans settle down for a favorite television show every night before bed. In many ways, this seems like the perfect way to entertain yourself while relaxing in the hours between work and sleep. However, watching TV (or looking at any other screen) at night appears to affect the circadian rhythm in ways that could be detrimental to your health. Even if you fall asleep in front of the television, the flickering lights could be keeping you from getting the high-quality rest that you need.

Artificial Light and the Circadian Rhythm

Like most living organisms, we have internal clocks that keep our sleep-wake cycles as well as other vital processes on track. Our circadian rhythm can run independently of outside influence but also constantly adjusts itself according to external cues. Although temperature, meal times and other factors are important, light is one of the most crucial cues.

Our ancestors did not have electricity or indoor lighting, so the presence of bright light was a powerful cue as to the time of day. They rose with the dawn and went to bed soon after dark. In the modern world, however, we have both schedules and light sources that are not dependent on the rising and setting of the sun. Unfortunately, our bodies sense bright light and interpret it as sunlight, a cue to put off making melatonin, a critical sleep hormone, for another several hours. This is particularly true of blue light, the wavelength emitted by our televisions, smartphones and other devices.

An increasing number of people in the modern world suffer from sleep disorders. In addition, the rates of certain chronic illnesses have increased sharply. Could these two factors be connected?

Could Watching TV at Night Impact Your Health?

Hundreds of recent studies have found links between exposure to blue light, especially in the hours before bed, and serious diseases. People who are exposed to light at night on a regular basis, such as shift workers, have higher rates of diabetes, obesity and heart disease. Sleeping in a well-lit area is linked to an increased risk of breast cancer. In addition, men who watch more than four hours a day of television have a higher risk of colorectal cancer, likely to a combination of being sedentary and being exposed to light in the evenings.

There appears to be a direct causative effect between blue light and cancer. Researchers believe this is partially due to the ways that this light interacts with our brains. While all light suppresses melatonin production, blue lights do so at more than three times the rate of a traditional incandescent light bulb. LED lights, which are now used in most energy-efficient light bulbs, suppress melatonin at more than five times the rate. 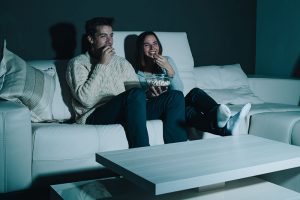 Melatonin is not just important for sleep. This hormone also triggers cell repair and a variety of crucial biological processes. People in the developed world who live in a world filled with screens and lights may be partially missing out on these vital processes, leading to an increase of serious diseases such as cancer.

Even if you do not have screens ablaze in your home in the hours before bedtime, the preponderance of light in the modern world could still be impacting your circadian rhythm and thus your health. True dark is rare in many parts of the globe, as artificial streetlights, shopping centers and other well-lit areas have become ubiquitous.

The Power of Dark

Although many people need artificial lights to some extent, there are ways to reduce their effect on your health. Choose light bulbs that have more yellow wavelengths of light rather than the bright white or blue lights that are so popular now. Put away or turn off screens at least an hour before you go to bed. Last, consider getting light-blocking curtains. Although these may seem unnecessary, they will block out the polluting lights from outside your home, many of which you may not even notice.

People all over the nation will go to sleep tonight with their television on, their smartphones in hand or other sources of light in close proximity. This can impact health in a variety of ways. Learning to live without a screen for even an hour before bed will help you to feel better, both tomorrow and throughout the rest of your life.