Obstructive sleep apnea is one of the most dangerous sleeping disorders because it involves the sudden disruption of breathing during sleep. While breathing typically resumes within a few seconds and the disruption may not even be noticed by the sleeper, it’s still a serious condition that can adversely affect other bodily functions. New research has found a possible link between sleep apnea and Alzheimer’s disease, making it even more vital to successfully treat this common sleep disorder.

What is Obstructive Sleep Apnea? 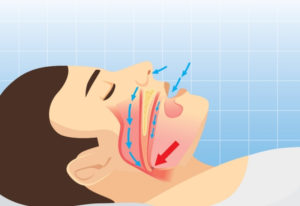 The disruption of breathing associated with obstructive sleep apnea occurs as a result of the relaxation of the throat muscles. Some of these muscles support the soft palate, which is a piece of soft tissue that’s suspended near the tonsils and connected to the walls of the throat.

As the muscles supporting the soft palate relax or collapse, the soft palate drops and blocks the airway. This blockage of airflow sends a message to the brain and triggers a reflex that disturbs sleep enough to contract the throat muscles, causing breathing to resume. Sleep apnea primarily affects cardiovascular and cognitive functioning by disrupting the flow of oxygenated blood, which is why failing to seek treatment can have long-term effects on health.

Some of the most obvious symptoms of obstructive sleep apnea are:

There are certain factors that increase the risk of experiencing sleep apnea. In general, older men are more likely to experience this condition. Other risk factors include obesity or being overweight, using sedatives or alcohol and smoking. Some medical conditions, including having a thick neck, type 2 diabetes and Parkinson’s disease, can also increase your risk of developing obstructive sleep apnea.

Typically, sleep apnea can be treated by wearing one of a variety of devices to bed. One option is to wear an oral device that pulls your jaw forward to prevent the soft palate from dropping. Alternatively, a continuous positive airway pressure (CPAP) involves wearing a mask that’s connected to a machine, which will increase air pressure throughout the night. This keeps the airway open to eliminate breathing problems and reduce snoring.

What Should You Know About Alzheimer’s Disease?

There are several different types of dementia, but Alzheimer’s disease comprises up to 80 percent of cases. While the disease is usually associated with the elderly and seniors are more likely to develop the condition, over 200,000 people under the age of 65 also suffer from this form of dementia. For those who are younger, the diagnosis of early-onset Alzheimer’s was established. This simply means the individual has developed the disease earlier than the average age.

The average lifespan for someone diagnosed with Alzheimer’s disease is six to eight years after the diagnosis, although longevity can be shorter or longer than the average. How long someone can live with Alzheimer’s depends on a variety of factors, including their health before getting the disease and how well they respond to treatments. In the best cases, individuals can live for up to 20 years with the condition, though this requires a better-than-average response to treatments.

Some of the most recognized symptoms of Alzheimer’s disease include:

While we don’t know what causes Alzheimer’s disease, we do know it results from a buildup of protein around certain brain cells. As these proteins, called amyloid and tau, are deposited around the brain cells, they block the activities of those cells. As a result, certain cognitive functions are impaired. Typically, blood clots and infections caused by the accumulation of protein and plaque in the brain will lead to the individual’s death.

Is There a Link Between Sleep Apnea and Alzheimer’s Disease? 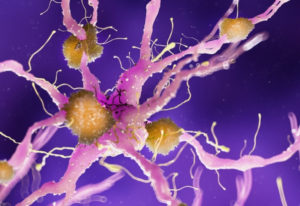 Examining the brains of deceased subjects, the researchers noted that the brains of subjects with sleep apnea exhibited a smaller hippocampus; the same effect that Alzheimer’s disease has on the hippocampus, which is the memory center of the brain.

As the researchers looked more closely at the hippocampus of each subject, they also found another similarity in the way amyloid plaques were concentrated in that area of the brain. The plaque built up in the same manner and followed similar patterns in both obstructive sleep apnea and Alzheimer’s disease, suggesting that amyloid plaque presence is essential for either condition to occur. In sleep apnea subjects, the amount of plaque build-up depended on the severity of the disease.

Another marker for Alzheimer’s disease is the growth of neurofibrillary tangles, which first affect a neighboring part of the brain called the parahippocampal gyrus. When examining sleep apnea subjects, although neurofibrillary tangles weren’t correlated to sleep apnea severity, the researchers did detect tangles and plaque buildup in the parahippocampal gyrus, which they believe is the area of the brain where both Alzheimer’s and sleep apnea begin.

Although more studies are needed, researchers believe the oxygen deprivation caused by obstructive sleep apnea may contribute to the accumulation of amyloid protein in the brain. In turn, the buildup of amyloid protein may result in the development of Alzheimer’s disease. In the future, the researchers hope to learn more about the role that oxygen plays in the development of amyloid plaque and how sleep apnea treatments play a role in treating both diseases.