Going to Bed On Time: The Key to Good Health?

Do you have a regular bedtime? Most children go to bed at a set time, but adults instead fill their evening with household chores, to-do lists, work and television screens. While it is hard for many adults to force themselves to bed at the same time every night, this one habit can make a huge difference. According to several recent studies, keeping a set bedtime may be the key to good cardiovascular and metabolic health.

Benjamin Franklin once observed that “early to bed and early to rise makes a man healthy, wealthy, and wise.” However, many modern people appear to have forgotten this advice. Thirty to forty percent of American adults have insomnia. Even those who do not have a medical disorder often miss out on sleep regularly.

However, simply getting your necessary eight hours of sleep does not appear to be enough for optimal health. It is also important to get a high quality of sleep. Going to sleep at the same time every night appears to be an important part of getting that high-quality sleep we all desire. Unfortunately, this is not common in the Western world. Very few adults have a set bedtime, which means many of us are missing out on the quantity and quality of sleep that we need.

The Health Risks of Sleep Loss

There are two biological forces that drive us to sleep. One is called our sleep drive, which makes us feel tired at the end of a long day due to the accumulation of different biochemicals in our cells. Sleep drive is the reason you feel tired after being awake a certain number of hours, even when switching time zones. The second force that makes us sleepy is our circadian rhythm, or internal 24-hour clock. Our circadian rhythm ensures that we release different hormones to promote wakefulness or sleepiness at the times when we are likely to be awake or asleep.

Melatonin is one of the key biochemicals that controls your circadian rhythm. It is crucial not just in helping you to fall asleep, but in helping you to have restful sleep. Melatonin helps to sustain our sleep cycles and also to promote vital cell repair and other activities that occur at night. Its release is based partially on external cues such as the presence of light. However, it also is released on a schedule, based on when you have gone to sleep in the past. People who do not go to sleep at the same time every night often have low levels of melatonin. This can lead to less restful sleep and to physiological damage to cells that are not able to repair themselves on a healthy schedule.

Going without sleep has been found in numerous studies to contribute to heart disease, diabetes and a variety of other deadly diseases that are becoming increasingly common in the modern world. According to new research, going to bed at widely varying times can have the same effect, even if you otherwise get the recommended amount of sleep.

Is a Regular Bedtime the Key to Good Health? 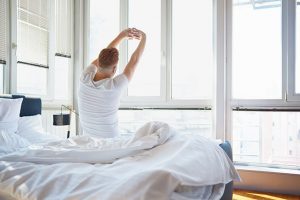 Researchers now believe that sleep regularity, getting sleep at roughly the same times every day, is as important to health as getting enough sleep in general. One study looked at 1,800 people with varying sleep habits. Their sleeping habits were tracked as well as their general health. The results were surprising: people who did not have a regular sleep schedule had higher rates of obesity, higher blood sugar levels and higher blood pressure. These are all very important predictors of developing heart disease and diabetes in the future. In addition, people who did not have a regular sleep schedule reported higher rates of stress and depression, suggesting that their sleep habits were affecting not just their physical well-being but their emotional health.

In general, this study found that whether a person keeps a regular sleep schedule, including a set bedtime, is the best predictor of their health. However, researchers warn that we should be careful in assuming causality. Some conditions, such as obesity, interfere with sleep quality while also contributing to diabetes and heart disease. There is a good possibility that poor health affects sleep as much as poor sleep affects health. Nonetheless, keeping a regular bedtime appears to be an important habit for preventing future disease and promoting wellness.

It can be difficult to get to sleep at a regular hour, especially as an adult without parents to send you to bed. However, there are ways to help adopt a bedtime. First, decide on a time that gives you eight hours of sleep and is possible with your current schedule. Set an alarm on your phone or other device for this time. About a half hour before your planned bedtime, dim lights and turn off devices. Take a bath, have a cup or herbal tea or otherwise perform an activity that calms you. When the alarm goes off, go to bed even if you don’t get feel sleepy.

It can take several weeks of following this plan to feel sleepy at your desired bedtime. However, most people find that going to sleep on time eventually becomes easier. While there are many reasons to stay up late in the modern world, the benefits of a bedtime are good reason to implement a regular sleep schedule.