The body’s biological clock regulates the hunger cravings that influence when you eat. These cravings naturally peak around 8 p.m. — but eating later in the day may increase your risk for certain diseases. Now, a new study finds that when you eat also influences caloric intake and food choices.

Why Do You Feel Hungrier at Night? 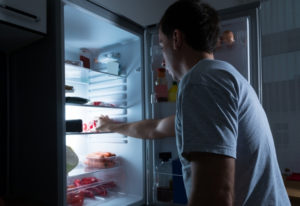 You have probably been told that breakfast is the most important meal of the day. But strangely, our bodies seem to naturally reject this concept. It’s very rare to feel hungry in the morning, even though you have already gone hours without eating. It’s also true that hunger cravings are generally stronger later in the evening, particularly after 8:00 p.m. This natural spike in hunger often leads to late-night snacking that can actually increase the risk of poor health over time.

Interested in looking at how the body’s 24-hour circadian rhythm influences when you eat and how dietary habits influence overall health, a recent study examined the eating habits of 12 men. The participants were between 20 and 42 years of age and none of them were obese. Over a two-week period, the participants were asked to complete surveys that inquired about their eating habits, including when they felt the strongest hunger cravings.

The study found that hunger was generally at its lowest around 8:00 a.m. and peaked 12 hours later at 8:00 p.m. It was also found that nighttime hunger cravings were usually satisfied with starchy, salty or sweet foods.

The researchers theorized that late-night cravings for high-calorie carbs is the body’s way of preparing for the ensuing seven- to eight-hour fasting period that occurs with sleep. This allows for a decrease in hunger cravings throughout the night, which would otherwise interrupt the sleep cycle. When we wake up in the morning, the body’s circadian rhythm continues to control hunger cravings, explaining why people are generally not hungry at 8:00 a.m.

New Research Suggests When You Eat Determines How Much You Eat

A new study shared at this year’s European and International Conference on Obesity revealed that when you eat may also influence the types of foods eaten. Additionally, meal timing also seems to influence how much is eaten. The study compared food consumption versus nutritional intake for adult men. The eating habits for 1,177 subjects were examined across a five-year period.

These findings suggest that those who eat later tend to eat higher-calorie foods, while those who eat earlier consume fewer calories. They also found that late eaters tend to eat less-healthy foods. The foods chosen by late-night eaters often provided lower levels of energy, while also containing less nutrition.

The researchers believe these discoveries are significant in that they could help people to make healthier choices. When people are encouraged to eat earlier in the day, they will naturally consume fewer empty calories and eat less food in general. This can help boost the metabolic rate, so the body will burn more energy naturally. Timing meals for better energy consumption may help to better control weight by encouraging healthier choices in terms of the types of foods eaten.

Eating Later May Increase Your Risk for Certain Diseases

Several studies have found that when you eat, as well as the fasting periods between meals, may influence the risk of developing certain diseases. In one study, it was found that subjects who stopped eating before 9:00 p.m., or those who fasted for two hours before going to bed, had a lower risk for developing breast and prostate cancer. Conversely, those who ate after 10:00 p.m., or those who went to sleep shortly after eating, had a higher likelihood of developing those same types of cancer. 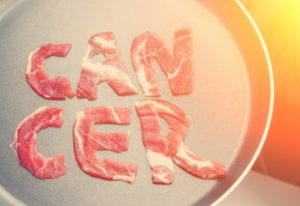 These findings add to previous research that shows what and when you eat influences the effect your diets have on your body. For example, eating more red meat has been shown to increase the risk of certain cancers, while a diet based heavily on plant-based foods cuts that risk. Since people make healthier eating choices when they eat earlier in the day, it’s easy to see how meal timing is linked to the risk of developing certain diseases.

Eating later in the evening also influences how the circadian rhythm regulates biological functions. For example, eating later causes a delay in the circulation of blood sugar, which, in turn, causes lower levels of insulin to be released. At the same time, the sleep/wake cycle remains the same. This suggests that there are two internal clocks and, while they rely on one another, they can get out of synch due to poor eating habits. This can throw off the release of sleep and stress hormones as well.

The goal should be to find a good eating schedule that works well for you. The schedule you work out for yourself should have your last meal finished before 6:00 p.m. and, if you choose to snack later, be sure to finish your last snack two hours before your bedtime. Additionally, snacks should be low in fat and sugar, while possessing some nutritional value. Developing these healthier eating habits will help you lower your risks for certain diseases, while also helping you reach your weight loss or weight management goals.