The Positive Effects of Time-Restricted Feeding

Many people in the Western world try to lose weight by restricting their number of calories. New studies suggest that time restricted feeding may be more effective.

Obesity is a growing problem in the Western world and one of the leading causes of medical costs. While many people eventually find ways to lose weight, an even greater number struggle even while cutting calories and making lifestyle changes. New evidence suggests that with feeding, as with most other events, timing matters.

Links Between Obesity and Shift Work

Obesity has long been linked to shift work in a variety of studies. Researchers believe that this is due to the intricate connection between circadian rhythm and metabolism. Many cell processes depend on the presence of melatonin or cortisol to run effectively, which are two of the major hormones that contribute to the regulation of our internal clocks. In general, cortisol is high just before we wake and stays high throughout the morning to sustain wakefulness. Cortisol increases certain types of metabolism to give us the fuel to complete daily activities. Melatonin is made in high levels in response to dark and has the opposite effect. Under the effects of high melatonin, we sleep peacefully while our bodies repair cells and flush out toxins.

When people work night shifts, they do not make cortisol and melatonin, as well as other circadian hormones, at the right times. They are exposed to light, activity and other triggers of wakefulness even when the rest of humanity is asleep. Over time, this hormonal imbalance and disruption of metabolism can lead to obesity, type 2 diabetes and a variety of other diseases. 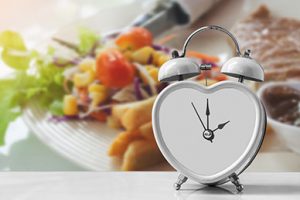 Several studies have found that mice also are prone to obesity and a multitude of diseases when they have external disruptions to their natural light-dark cycles. In fact, researchers can actually cause obesity in perfectly healthy mice simply by disrupting their circadian rhythm. These mice do not eat more calories on average, but they eat them at times outside their normal feeding times. Researchers decided to look at whether time-restricted eating without restricting calories could help these mice lose weight.

One group of mice was only given food at certain times of the day, while another was allowed to eat whenever they chose. The mice ate the same amount of calories, but the mice subjected to time restricted feeding lost weight. Not only did they lose weight, but their general health improved in a variety of ways. They had improved motor coordination, less insulin resistance, healthier livers and were generally happier healthier mice by all measures.

The big question remains: can time-restricted eating help humans the way it has been shown to help mice? This topic requires more study, but the current research indicates that time restricted feeding can help obese people to lose weight while also getting the same health effects as the mice. When combined with calorie restriction, the results can be especially effective. Despite many obvious differences between humans and mice, we and many other mammals share many of the biochemical pathways that link metabolism and circadian rhythm.

The body's biological clock regulates the hunger cravings that influence when you eat. The... [Read More][weiterlesen]