Are you a morning lark or a night owl? Although every person is unique, most of us have a circadian rhythm that falls into one of these two categories. Some of us are up with the dawn — or even before it! Others have more trouble getting up but feel more energetic as the sun begins to go down. Although both night owl and morning lark chronotypes are natural, one comes with some serious health risks. Luckily, new research has shown that these can be minimized with the right lifestyle changes.

Are You a Morning Lark or a Night Owl? 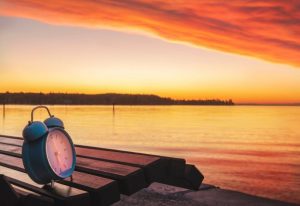 It is usually easy to tell whether you are a morning person or a night person. Even if you have to awake early in the morning, people who are natural night owls will simply function better later in the day. Similarly, a morning owl can usually handle working late on occasion, but it is not their natural schedule.

There was a time when night owls were viewed as lazier than morning people. We now know that this is more a matter of natural circadian rhythm than morality or motivation. However, this does not mean that morning people and night people are equivalent in every way. Science has shown that night owls actually have more health risks to worry about than their morning-friendly counterparts.

The Downside of Being a Night Owl

Night owls, known scientifically as ‘late chronotypes,’ are not uncommon. These people comprise around 20 percent of the population. Although one out of five of us are naturally night owls, our society is made for morning people. This can be a challenge both socially and physically.

School and work tend to begin early in the morning, which can be a challenge for people who are naturally more awake at night. Late chronotypes are often unable to go to sleep early enough to get a full amount of rest before they must awaken for the day. The result is that night owls suffer almost perpetually from a form of jet lag called “social jet lag,” in which their internal clocks are out of alignment with the world around them.

This constant mismatch can take an incredible physical toll. In one study, night owls were ten percent more likely to die over the 6.5-year length of the research. They are at higher risk of metabolic disease, heart disease and even cancer. In addition, they are more likely to be involved in fatal accidents, both at work and on the roads.

Night owls often make up for their lack of sleep with habits that are not conducive to good health. They are more likely to skip breakfast and to take in more caffeine. They eat at less predictable times in the day. In addition, they consume more alcohol and sugar.

These habits may help to keep people awake, but they are not great for health. These lifestyle differences could account for some of the discrepancies between night owls and morning larks. If this is true, changing these habits could have a positive impact on people who are naturally late risers.

With this in mind, researchers took a group of night owls and asked them to make a few simple changes. They went to bed early and minimized light exposure in the hours before bedtime. They woke up 2-3 hours earlier and got bright light exposure in the morning. They ate breakfast soon after awakening and had other meals at consistent times. Last, they kept the same schedule every day, even on weekends.

After three weeks of these changes, the research participants had measurable improvements in their health. Their physical shape improved, with higher scores on tests of strength and reaction time. The participants reported feeling less depression and stress. In addition, they had less sleepiness during the day and hit their natural energy peak several hours earlier than before, in the afternoon rather than the night.

These changes appear to make a difference not just in health risk, but in how the night owls felt on a daily basis. Although our early rising world can be a challenge for late chronotypes, simple changes in lifestyle can make a big difference.

Are Your Clocks Ticking On Time? 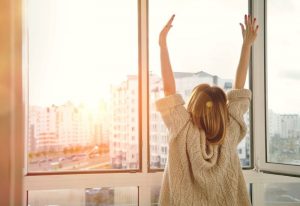 If you struggle with daytime sleepiness and nighttime wakefulness, you may be a night person. If so, just a few simple changes can make a huge difference in how you feel and how healthy you are later in life. Like these study participants, make the following changes to your daily schedule:

Last, keep a journal and see how you feel after a few weeks of these changes. You may find that you feel healthier and more awake during the day. These simple lifestyle changes may help you to feel better and also reduce your disease risk over your lifetime.