Do you find that you only wake up after the alarm clock goes off? Do you find yourself feeling sleepy long before bedtime every night? If so, you are not alone. Millions of people have a circadian rhythm that does not quite match the demands of their daily lives. This is not due to laziness or a lack of willpower, but rather the way your genetics and your environment combine to influence your internal clocks.

Although it is natural to be a night owl or a morning lark, your internal clocks may have a negative effect on your health when they conflict with the demands of your environment. According to new studies on death risk and other health issues, this is particularly important if you are night owl with a late chronotype.

What Is a Night Owl?

Everyone is born with their own unique schedule. However, most of us fall into three rough categories: morning larks, night owls and people who are somewhere in between. You may be familiar with the two primary chronotypes: morning larks and night owls. Morning larks are people who naturally awaken early in the morning and go to sleep soon after dark. Night owls, on the other hand, have trouble falling asleep before the wee hours of nights and tend to awaken much later.

People used to believe that night owls were simply lazier and less motivated than others. However, we now understand that late risers often have a different chronotype. We all are born with our own innate internal clock. While we can influence it with light levels and other external cues, it is difficult or even impossible to completely reset it. 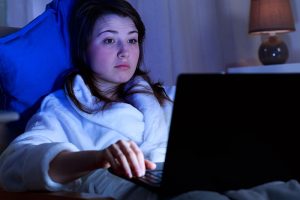 Night owls tend to have the most trouble conforming the schedules of work, school and other societal institutions. This is because their natural rhythms are very different from those of the business world and academia. Most jobs and classes begin early in the morning. A person who cannot go to sleep until late at night that’s will often find themselves missing sleep. After all, most people cannot simply lay down and fall asleep before they are tired. This perpetual feeling of jet lag can lead to fatigue, memory problems and lower cognitive function. According to a new study it may also lead to a higher risk of death.

To determine the comparative health risk of early birds and night owls, researchers looked at a massive group of more than 400,000 British people. In addition to other health screenings, people were asked about their natural sleep schedule.

After being followed for many years, researchers found several interesting health differences between morning larks and night owls. Night owls were more prone to a wide variety of illnesses from diabetes to gastrointestinal disease to mental illness. However, they were not just sicker than morning larks. Most worrisome was the fact that night owls had a ten percent increased risk of dying in the six and half year time period of the study.

If both chronotypes have to live outside of the normal human circadian rhythm, why are night owls so disproportionately affected? This chronotype unfortunately is often the one experiencing the greatest conflict with the demands of their job or other activities. Morning larks can easily avoid nighttime activities most of the time, but rising early in the morning is necessary for most people.

The Challenge of Living By External Clocks

While night owls appear to be disproportionately affected by a mismatch between their circadian rhythm and the demands of their everyday life, they are certainly not the only modern people to lose sleep. Social jet lag has been called one of the biggest public health challenges of our times. Many people are not able to keep a well-regulated circadian rhythm and thus suffer the health consequences.

Shift workers, for example, work changing shifts or shifts at odd hours. These people have been found to have a much higher rate of metabolic disease, cardiovascular disease and even cancer. Night owls appear to be just one of many groups of people whose work schedules conflict with their circadian rhythm to their detriment.

Is It Possible to Change Your Chronotype?

Are the night owls among us doomed? The answer is no — and also that it is complicated. Although it is ideal to have a schedule that matches the needs of your circadian rhythm, there are ways of being healthy even when this is not possible. For example, many people manipulate light levels to help keep their circadian rhythm on track. Bright light keeps us from releasing melatonin, while darkness encourages it. Thus, night owls can keep bright lights on during the times that they want to be awake, such as early mornings, while turning off lights about an hour before they want to go to bed. In addition, melatonin supplements can help a tired night owl fall asleep more easily.

Night owls appear to have higher risk of several diseases related to circadian dysfunction, and even a higher risk of death. However, this fate is not set in stone. With effort and attention to detail, even the most extreme night owl can move toward a healthier circadian rhythm and better whole body health.