A large-scale study conducted in the UK indicates intimate ties between sleep-wake disruption and mood disorders. The study, published in The Lancet Psychiatry, suggests that disruptions to our natural circadian rhythms may lead to cognitive decline and an increased risk for mental health issues such as bipolar and major depressive disorder.

Circadian Rhythms and Their Impacts on Health and Disease

All lifeforms exposed to sunlight possess innate timing devices that we refer to as circadian rhythms. These natural clocks exert control over just about every biological process in our bodies and tend to adhere to a typical 24-hour cycle. Essential to our overall well being, circadian rhythms play a key part in regulating bodily functions such as cell regeneration, hormone production, metabolic processes, immunity and even stress responses.

What could be considered the body’s “master clock” is located in a part of the brain within the hypothalamus which is referred to as the suprachiasmatic nucleus. The suprachiasmatic nucleus uses light cues to synchronize the many ancillary clocks that reside throughout the entire body. Nearly every cell in our bodies possesses a unique cluster of proteins that switch on or off depending on what time of day it is, and factors like shift work, indoor lifestyles and even traveling across time zones can all throw a wrench into the delicate photosensitive clockworks, setting off a long tail of unwelcome side effects.

Consistently, research has shown that even small disruptions to these rhythms adversely affects health. It’s widely accepted that sleep deprivation causes cognitive impairment and irritability, but sleep disruptions have also been shown to lead to increased risk of heart disease, obesity, and type 2 diabetes. This newest study adds to growing evidence that irregular sleep-wake patterns share close ties with mental health issues such as depression, anxiety and general feelings of malaise.

While previous studies have suggested an existing link between sleep-wake disruption and mental health, the research has been largely inconclusive due to self-reporting, small sample sizes, and failure to adjust for appropriate confounding factors. Hoping to address these issues in methodology, researchers from the University of Glasgow analyzed activity data from over 91 thousand participants in what is the largest observational study of its kind to record a significant link between the body’s internal clocks, mental well-being and adverse health effects.

The team analyzed the activity data of 91,105 individuals from the UK Biobank, an ongoing national research project tracking the health of half a million UK residents, to garner an objective measurement of rest and activity patterns, which they refer to as relative amplitude. Selected participants ranged in age from 37 to 73 and were required to wear an accelerometer for seven days between 2013 and 2015 in order to record their activity. Their activity information was linked to mental health questionnaires which were used to assess mental health symptoms, feelings of subjective well-being as well as cognitive function.

Constructing mathematical models, the team investigated the associations between a low relative amplitude, defined by increased activity during rest periods or decreased daytime activity, and cognitive function, general well-being as well as the lifetime risk of developing a mood disorder. According to their data, circadian disruption is strongly associated with: 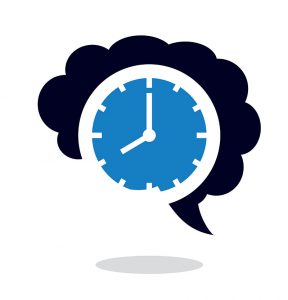 The team found these associations to be independent of possible confounding factors such as demographic, education or lifestyle.

She went on to say, “to look at this in more detail, it will be useful for future studies to track participants’ rest-activity patterns over time to see whether disturbed rhythms can predict whether someone is more likely to go on to develop a mood disorder.”

The team acknowledges that there are still limitations to their research, noting that mental illness typically begins in a much younger population segment than was represented here. The authors noted, “relative amplitude is relatively cheaply and easily measured and could be used to identify people at greater risk of major depressive disorder or bipolar disorder, or those who might benefit from treatments that directly target the circadian clock. Given that most mental health disorders begin during adolescence, more longitudinal studies in younger populations might improve our understanding of causal mechanisms, and help find new ways to predict mood disorders and fine-tune treatments.”

It remains difficult to determine whether clock disruptions lead to health problems or if it is, in fact, the other way around.

“While our findings can’t tell us about the direction of causality, they reinforce the idea that mood disorders are associated with disturbed circadian rhythms, and we provide evidence that altered rest-activity rhythms are also linked to worse subjective well-being and cognitive ability,” stated Dr. Lyall.