When our daily activities don’t keep time with our internal clocks, we experience diminished performance, researchers say. A new study published in the journal Scientific Reports has found that students whose internal clocks are out of sync with their class times earn lower grades than those whose circadian rhythms better match their daily schedules. According to the study, poor grades linked to class schedules because when our individual times of peak alertness differ from the demands of our schedules, we experience a form of social jet lag that can impede performance.

Continued research accompanies an increasing awareness of just how many ways our internal clocks affect us. Every individual moves to a unique rhythm that is somewhat preset by genetics. The resetting of these clocks is not quite so easy as winding up a wristwatch, and ignoring these internal timers has detrimental effects on our health. However, most of us are forced to adhere to the demands of the day rather than our own internal schedules, resulting in billions of people around the world suffering from the mental fog of social jet lag. This latest study adds weight to the idea that tailor-made days may hold the key to a brighter and healthier populace.

Social Jet Lag is the Norm

In potentially the largest survey of social jet lag ever done utilizing real-world data, researchers from UC Berkeley and Northeastern Illinois University tracked the online activity of 14,894 college students over the course of two years. The students were grouped into three basic chronotypes, night owls, daytime finches and morning larks, based on their activities on the days they did not attend class. The researchers then examined how each group had scheduled their classes and compared the students’ class times to their academic performance.

While some of the cohorts had schedules in-time with their circadian rhythms, a majority of the students participating experienced social jet lag to varying degrees. Study coauthor Aaron Schirmer of Northeastern Illinois University explained to Reuters Health, “social jetlag is the misalignment between an individual’s circadian clocks and their environment due to social impositions like work or school. For example, a late-type student who needs to wake up for an 8 a.m. class twice per week is most likely socially jetlagged.” 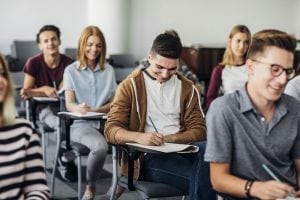 Co-lead author of the study, Benjamin Smarr, a postdoctoral fellow studying circadian rhythm disruptions at UC Berkeley, stated, “we found that the majority of students were being jet-lagged by their class times, which correlated very strongly with decreased academic performance.”

“Our research indicates that if a student can structure a consistent schedule in which class days resemble non-class days, they are more likely to achieve academic success,” said Schirmer.

Overall, the greater the amount of social jet lag experienced, the more significant was the decrease in performance observed. Later chronotypes, the night owls, were affected the most by the misaligned schedules.

“Because owls are later and classes tend to be earlier, this mismatch hits owls the hardest, but we see larks and finches taking later classes and also suffering from the mismatch. Different people really do have biologically diverse timing, so there isn’t a one-time-fits-all solution for education,” Dr. Smarr said explained.

A 2017 study conducted by Harvard and published in the journal Nature compared school performance between students who kept regular sleep schedules and those who slept irregular hours and found that despite each group sleeping the same amount of time, those who kept a regular routine had a higher GPA. The researchers believe that melatonin may be the culprit behind this difference in performance.

According to Andrew Phillips, lead author of the Harvard study, “our body contains a circadian clock, which helps to keep time for many biological functions. One of the key markers of the circadian clock is melatonin. Usually, at nighttime, our circadian clock sends a signal that tells us to release melatonin overnight.”

The Harvard team explained that it was the later release of melatonin pushing our circadian clocks back that essentially makes the body feel as though it’s in another time zone. This explains why the later the chronotype, the more hard-hitting the social jet lag.

The authors of this most recent study finding poor grades linked to class schedules believe students and school administrators alike could possibly use their approach to reconsider class scheduling or help identify those students who may see benefit from arranging their courses to allay the effects of social jet lag.

Dr. Smarr says their results suggest, “rather than admonish late students to go to bed earlier, in conflict with their biological rhythms, we should work to individualize education so that learning and classes are structured to take advantage of knowing what time of day a given student will be most capable of learning.”

It’s increasingly clear that society’s demands just don’t sync up to what we’re learning about our internal clocks. A misaligned schedule disturbs our circadian clocks and impacts our mental and physical health and performance. Unfortunately, the traditional workday often disregards these ramifications, but maybe research such as this will pave the way for a future where that is one day not the case.