Wound Healing: Why Time of Day Is Crucial

Almost every process in our body, including sleep, the release of hormones and metabolism, is regulated by our internal clocks. Each cell in our bodies has its own biological clock, which is synchronized by hormones, temperature and other physical signals. The entire symphony of clocks is coordinated by a single conductor, which is a master clock in the brain, also known as the suprachiasmatic nucleus (SCN).

A new study published in Science Translational Medicine has now found that wound healing is also affected by our internal clocks. The researchers found that injuries such as cuts or burns healed about 60 percent faster if the injury was sustained during the day rather than at night. This is the first study to show how the body’s internal clocks regulate wound healing through the skin cells and optimize healing during the day.

Wounds Heal Twice as Fast During the Day

Researchers at the Medical Research Center Laboratory of Molecular Biology in Cambridge conducted studies on mouse skin cells which revealed that wounds incurred during the day healed twice as fast as those incurred at night. The scientists note that this effect could also be observed in human burn victims. Using data from the International Burn Injury Database, which collects burn injuries as well as the time they occurred, they analyzed data from 118 patients with burn injuries. The result was surprising: 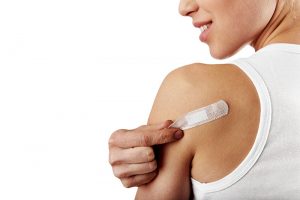 Fibroblasts (connective tissue cells) are important for wound healing. When the skin is injured, these cells accumulate in the wound. They play a crucial role in building granulation tissue by producing a precursor of collagen that eventually matures into solid collagen fibers. These connective tissue cells demonstrate circadian timing that gives their biological function an approximately 24-hour rhythm.

The researchers concluded that the faster healing during the day could be attributed to the skin cells moving much faster to repair the wound site when the clock was set for daylight. Within individual cells, the healing rate was accelerated by the increased activity of proteins involved in the movement and repair of cells, particularly the protein actin. The cellular clock modulates the efficiency of actin-dependent processes such as cell migration and adhesion, which ultimately influence the effectiveness of wound healing. The wound sites of day wounds also contained more collagen—the most important structural protein in the skin—that persisted up to two weeks after the wound was sustained.

The researchers believe that this healing process is controlled by the inner circadian clocks of the individual cells rather than by signals that are transmitted throughout the entire body.

Dr. John O’Neill, the lead author of the study, notes: “This is the first time that the circadian clock within individual skin cells has been shown to determine how effectively they respond to injuries. We consistently see about a two-fold difference in wound healing speed between the body clock’s day and night. It may be that our bodies have evolved to heal fastest during the day when injuries are more likely to occur.”

These Research Results Are Critical for the Correct Timing of Therapies

According to the scientists, medical procedures such as surgery as well as the development of drugs that improve wound healing could benefit from this new research. One of the study’s authors, Dr. Ned Hoyle, notes, “We’ve shown that the daily cycles in our body clock control how well cells can repair damaged tissue by affecting an essential protein called actin. Efficient repair of our skin is critical to preventing infection, and when healing goes wrong, wounds can become chronic or excessive scarring can occur.” Hoyle also speculated that the cell clocks at the surgical site may be “adjusted to the best time for healing before the operation” and that “the time of surgery could be scheduled to coincide with each patient’s biological time.” Accordingly, “larks,” or early risers, could undergo surgery in the morning, while “owls,” or late risers, could be treated in the afternoon.

The Right Time for Heart Surgery

Another recent study published in The Lancet also suggests that the right timing can be of considerable importance when it comes to health care. After open heart surgery, some patients experience cardiac events that negatively affect outcomes and increase their risk of death. The Lancet study examined whether this poor outcome could be influenced by the time of day an operation took place. To determine this, the medical records of 596 people who underwent heart valve surgery between January 2009 and December 2015 were analyzed. Half the patients had the surgery in the morning, the other half in the afternoon.

The scientists point out that more intensive studies are needed to understand the effects in humans, in particular, whether changes to current surgical practice would be beneficial. However, the research by Nathaniel Hoyle of the Research Center Laboratory of Molecular Biology and his team has shown how important our internal clocks are to the healing process of injuries.

“This research shows for the first time how circadian factors are important for wound healing. By taking these into account, not only could novel drug targets be identified, but the effectiveness of established therapies may also be increased by changing what time of day they are given.”