New research examining the relationship between foods high in saturated fats and cardiovascular disease, the blood protein apolipoprotein A-IV has been shown to slow down plaque buildup in blood vessels. What’s more, it was found that apolipoprotein A-IV possesses its own circadian rhythm, and is most active while we’re asleep at night.

How Olive Oil Could Lower Your Risk of Cardiovascular Disease 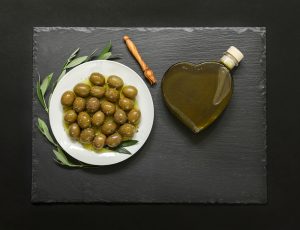 Blood plasma contains types of proteins, referred to simply as blood proteins or plasma proteins, that perform a variety of roles within the body. Some proteins act as transports for fats, hormones, minerals and vitamins, while others play more complicated roles, acting as enzymes, kinin precursors or protease inhibitors. Apolipoprotein A-IV, which was the subject of recent studies on the link between unsaturated fats and cardiovascular health, is one such blood protein.

Blood clotting occurs when platelets within the blood clump together, in a process called platelet aggregation, as a result of blood vessel injury or as a byproduct of cardiovascular disease. Platelet aggregation can cause complications such as the blocking of blood flow, a condition which can lead to potentially lethal thrombosis. Necessary for this process to occur is the presence of a particular platelet receptor, integrin αIIbβ3. According to findings published in the journal Nature Communications, apolipoprotein A-IV blocks this receptor from binding to platelets, thus inhibiting clotting and the development of thrombosis.

When required, platelet aggregation is a beneficial and necessary function, but unnecessary aggregation can have potentially deadly consequences. “Platelet aggregation can save lives, because it can stop bleeding in damaged vessels. But we usually don’t want platelets to block blood flow in the vessels. This is thrombosis, and if vessel occlusion occurs in the heart or brain, it can cause heart attack, stroke or death,” commented the lead researcher of the study, Dr. Heyu Ni, who is the Platform Director for Hematology, Cancer and Immunological Diseases at St. Michael’s Hospital Keenan Research Centre for Biomedical Science

According to the authors of the study, thrombotic disorders like stroke and heart attack are the top causes of mortality globally, and platelet aggregation is an essential component for the advancement of these conditions. The CDC estimates that in the United States alone, heart disease claims the lives of over 600 thousand people every single year. That means that one out of every four deaths in America is from cardiovascular complications, the leading cause of which is atherosclerosis. 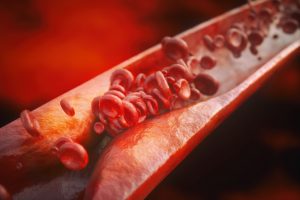 Platelets come together using a series of binding connectors. In order for one blood platelet to bond with another, the integrin αIIβ3 receptor binds with another protein found in abundance within blood, which is called fibrinogen. The fibrinogen molecules go on to bind with a second integrin αIIβ3 receptor located on another platelet. Fibrinogen molecules continue this bridging process, potentially also binding with other proteins, until ultimately leading to potentially dangerous platelet aggregation.

Both in lab models and human tests, the team observed that apolipoprotein A-IV links itself to the integrin αIIβ3 receptors and essentially blocks the fibrinogen molecules from bridging with platelets, thus inhibiting the aggregation of platelets within blood vessels. Not only does apolipoprotein A-IV decrease blood vessel blockages caused by platelet aggregation, the protein appears to morph its own shape in order to allow for increased blood flow and more effectively protect from blockages.

According to Dr. Ni, “this is the first study to link apoA-IV with platelets and thrombosis. With this work, we have also explained why higher levels of apoA-IV can slow down plaque build-up in blood vessels, known as atherosclerosis, because this process is also related to platelet function.”

“Mother Nature wants us to sleep well. So we are protected by this protein while we sleep, and most likely to experience a cardiovascular event after waking up in the morning,” said Dr. Ni.

Their findings demonstrate that meals high in unsaturated fats, when combined with complimentary sleeping habits, are an effective combination for reducing the risk of cardiovascular complications like heart attack and stroke.

The team will continue their research into the protein, with future efforts focused on delving deeper into apolipoprotein A-IV in an effort to understand how we might be able to utilize these protective mechanisms for potential therapies for cardiovascular disease and other conditions that may develop as the result of platelet aggregation.