Numerous studies show connections between sleep disorders and greater risks of heart disease and obesity. The effects can even reduce life expectancy. However, it is not only essential how long a person sleeps, every single minute of the depth of sleep is particularly important. During deep sleep, hormones are released, cells repaired, and healing processes promoted.

The immune system also benefits. In addition, memories are stored in the brain during this phase and blood sugar levels are brought into balance. However, according to research, restful sleep is also important for our heart health, because poor sleep quality can lead to dangerous high blood pressure.

Normally, deep sleep accounts for about 25 percent of a night. In this phase, the brain waves are weakened, as is the heartbeat and the release of stress hormones. If the blood pressure is then measured, the values ​​are usually ten points lower. The nocturnal pressure drop is rated very positively. A condition in which it does not occur is considered a risk factor for heart disease.

Researchers at Harvard Medical School focused on the rare 90 to 120 minutes of a night when healthy people really get deep sleep. They recruited 784 men with normal blood pressure, and had each of them monitored at home by a small sleep wave detection machine. It went like this for 42 months.

It turned out that those men in whom this important regeneration phase was noticeably shortened usually reacted at night with an increase in blood pressure to dangerous dimensions (some of those examined only had four percent deep sleep per night, almost a quarter of an hour). Most of them had generally disturbed and shortened sleep.

Reduced Slow Wave Sleep (SWS), one of the deeper stages of sleep, is characterized by non-rapid eye movements (non-REM) from which it is difficult to wake up. It’s represented by relatively slow, synchronized brain waves called delta activity on an electroencephalogram. Researchers found that people with the lowest SWS scores had an 80 percent increased risk of developing high blood pressure. 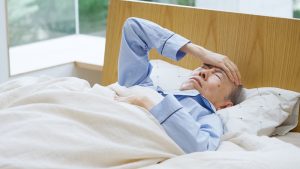 SWS, one of the deeper stages of sleep, is characterized by non-rapid eye movements (non-REM) from which it is difficult to wake up. It’s represented by relatively slow, synchronized brain waves called delta activity on an electroencephalogram. Researchers found that people with the lowest SWS scores had an 80 percent increased risk of developing high blood pressure.

Men who spent less than 4 percent of their sleep time in SWS were significantly more likely to develop hypertension during the 3.4 years of the study. Men with reduced SWS generally had poorer sleep quality, as measured by shorter sleep duration and more nocturnal awakenings, and had more severe sleep apnea than men with higher SWS scores. However, of all measures of sleep quality, decreased SWS was most strongly associated with the development of hypertension.

A poor night’s sleep that night and the following day can lead to an increase in blood pressure, according to a new study from the University of Arizona. The study, to be published in Psychosomatic Medicine, offers a possible explanation for why sleep problems have been shown to increase the risk of heart attack, stroke and even death from cardiovascular disease.

The researchers wanted to learn more about the link in a study of 300 men and women aged 21 to 70 with no history of heart problems. Participants wore wearable blood pressure cuffs for two consecutive days. The cuffs randomly measured the participants’ blood pressure at 45-minute intervals every day and also overnight. At night, participants wore actigraphy monitors — wristwatch-like devices that measure movement — to determine their “sleep efficiency,” or the amount of time they spent in bed sound asleep.

Overall, those who had lower sleep efficiency showed an increase in blood pressure during that restless night. They also had higher systolic blood pressure — the highest number in a patient’s blood pressure reading — the next day.

More research is needed to understand why poor sleep increases blood pressure and what this might mean in the long term for people with chronic sleep problems. However, these studies underscore the importance of a good night’s sleep and that individuals with sleep problems should take steps to improve their sleep quality.