Pleasure is one of the major motivators of human behavior. Most people spend their lives in almost constant pursuit of pleasure, whether it be through food, indulging in new belongings or even through relationships with others. This pleasure-seeking behavior is hard-wired into our brains right down to our brain cells. Sleep and our circadian rhythm similarly are an innate part of human biology and psychology, shared by people from every culture that has ever existed. According to new research, the neurons that regulate biological clock actions relating to the circadian rhythm and sleep may also play a role in regulating pleasure.

Pleasure and Reward: The Role of Dopamine

Dopamine is a neurotransmitter in the human brain, which means that it is released by neurons in the brain as a means of communication with other neurons. Dopamine is responsible for coordinating movement, storing memories and thinking clearly. Diseases that affect dopamine, such as Parkinson Disease, rob people of their ability to move and think clearly and even their ability to make simple decisions. However, the greatest and best-known role of dopamine lies in human pleasure and reward.

Dopamine is released when we perform an activity that brings us pleasure or is rewarding. This could be enjoying food, money or even sex. If you find an opportunity enjoyable and wish to do it again, there is a good chance that this neurotransmitter is involved. Dopamine is also involved in the high that people get from drugs, as well as the trap of addiction. New research on the circadian rhythm suggests that this neurotransmitter may also be linked to sleep-wake cycles, released by the neurons that control our internal clocks.

It is well known that the suprachiasmatic nucleus (SCN) of the hypothalamus functions as our body’s master clock, integrating and communicating messages from different parts of the body. Many factors affect our sleep-wake cycles, such as light levels, the time that we eat and even genetics. The suprachiasmatic nucleus combines these different and at times even conflicting signals into one salient body clock. Researchers have been studying this area of the brain for more than a decade trying to understand more about how our sleep-wake cycles are regulated.

Although the suprachiasmatic nucleus is a small area of the brain, it is made up of more than 20,000 neurons. These neurons appear to communicate with dopamine circuits in the brain that are responsible for processing feelings of pleasure and reward. In a recent study, researchers were able to knock out, or disable, dopamine circuits in the brains of mice. These mice were then subjected to a disturbance of their circadian rhythm similar to jet lag. The mice with their dopamine circuits disabled took far longer to adjust to the change in their circadian rhythm, suggesting that there is a link between our internal clocks and our pleasure centers.

A Link Between Pleasure and Your Biological Clock? 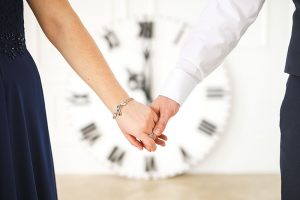 This was just the first of several studies on the link between our circadian rhythm and our pleasure centers. Successive studies found that the neurons in our “master clock” actually use dopamine as a neurotransmitter. In addition, people with diseases of dopamine transmission such as Parkinson disease, schizophrenia and bipolar disorder often see a marked worsening of their symptoms when they do not get enough sleep. In many ways, this research merely confirms and explains a connection that most people can sense intuitively.

What does this mean for human health? These studies suggest that there is a likely a subtle interplay between pleasurable experiences and our circadian rhythms. When we eat or enjoy other pleasurable activities, we are probably affecting our sleep-wake cycles in ways that we do not yet understand. Similarly, this link may explain why people suffer so many issues with depression and emotional control when they are sleep-deprived.

Sleep and pleasure appear to be intricately linked. However, this may not be good news for many modern people. We live in a time when many people struggle to get the sleep that they need. Millions of people struggle not just with sleep disorders, but with work schedules and other factors that can compromise their ability to keep a stable sleep schedule. According to new studies, this may be affecting our ability to feel pleasure as well. Keeping a well-regulated circadian rhythm may be essential to our happiness.

How can you ensure that you get the sleep you need? While there is no guaranteed method, researchers recommend trying the following strategies:

Maintaining a well-regulated sleep-wake cycle can be a challenge in the contemporary world. However, it appears to be more necessary than we previously realized. Sleep, or the lack thereof, can affect your emotional and physical health in a variety of ways.