Melatonin Shown to be Effective in the Prevention of Migraines

Migraines and other headaches are a challenge to treat—even with the best modern medical care. New research suggests melatonin may be an effective prevention tool.

If you have ever had a migraine, you likely did not forget the experience. While there are a few medications that can prevent this problem, these are ineffective for many sufferers and come with a wide range of debilitating side effects. Melatonin, a supplement often taken as a sleep aid, may be as good or even better at preventing migraine without all of the unwanted downsides.

A Painful Problem Without a Cure

Migraines are more than just a headache. People who get these headaches suffer a variety of unpleasant symptoms throughout the body. These can include nausea and vomiting, sensitivity to light and sound, seeing auras and other things that are not present, fatigue and more. Even worse, migraines can last anywhere from a few hours to several days. While lying in a dark quiet room can help, many people struggle both to manage the pain and to prevent it.

There are a few medications that can help prevent migraines. Many physicians favor amitriptyline, a tricyclic antidepressant sold under the brand name Elavil. However, amitriptyline can have very uncomfortable and even dangerous side effects such as dizziness, diarrhea and irregular heartbeat. Many people cannot take it due to other disorders. More than five percent of sufferers cannot effectively prevent and treat migraines, even with modern medications. The result takes a huge toll on people with this health problem as well as the American economy, with 37 million migraine sufferers missing work and other events to nurse a migraine.

A newly published study in the Journal of Neurology, Neurosurgery and Psychiatry suggests that melatonin may be as effective as amitriptyline in preventing migraines. Melatonin was almost as effective as the pharmaceutical medication in eliminating migraines, more effective at reducing them and had far fewer side effects. In addition, people taking melatonin instead of a migraine medication saw positive side effects such as weight loss. 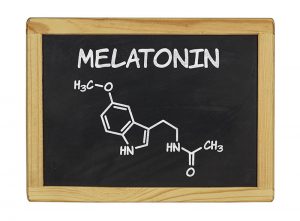 Produced in the suprachiasmatic nucleus of the brain in response to a lack of light, melatonin is best known for its role in regulating the circadian rhythm. New research suggests its effects may be more far-reaching. For example, the weight loss seen in this migraine study has been noted as a positive effect of the supplement. It promotes the formation of brown fat that burns calories at a high rate as opposed to other kinds of fat. Melatonin has a variety of positive health effects, while a lack of this hormone can cause disruptions to almost every system in the body.

How exactly does melatonin prevent migraine headaches? The exact mechanism is currently unknown but there are many links between circadian rhythm and migraine headaches. Most migraine sufferers get migraines around the same time every day, suggesting a circadian component. In addition, a gene linked to circadian rhythm disorders may be one of the main causes of migraines. It is possible that taking melatonin kills the proverbial two birds with one stone, preventing migraines while encouraging a healthy sleep-wake cycle.

This is exciting news for people who suffer from migraines and are looking for new treatment options. New research in chronobiology is improving lives and making it easier for people to live in tune with the beat of their internal clocks.