Not Getting Enough Sleep Linked to Unhealthy Snacking

Sleep deprivation and maintaining a healthy weight are among the most common health problems people face in their day-to-day lives. Well over one third of Americans routinely don’t get enough sleep. Just over 42 percent of American adults are obese. A little more than 30 percent of American adults are overweight, meaning that almost three quarters of the population has a weight problem. According to a fascinating new study, there may be a connection between these two common health problems. Ohio State University researchers find not getting enough sleep linked to unhealthy snacking. 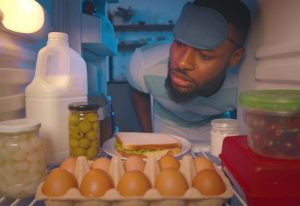 Ohio State University researchers used data from the National Health and Nutrition Examination Survey (NHANES) for their study. They analyzed the dietary information from 19,650 American adults, ranging in age from 20 to 60. The adults participated in the NHANES from 2007 to 2018.

In looking at that data, the researchers noted not only what was eaten, but also when it was eaten. The researchers also divided the people into groups according to their reported sleep habits, separating those getting the recommended seven hour minimum of sleep per night from those sleeping less than that amount.

As they analyzed their data, patterns emerged. This one probably won’t surprise anyone: Almost everyone, 95.5 percent of participants involved in the study, had at least one snack per day. Of those snacks, half were salty snacks like potato chips, sweet snacks such as cookies and soda, and energy drinks. However, what may be surprising at first glance is that those who weren’t getting enough sleep tended to snack more in the morning than those that were sleeping enough. Those sleeping less were also more likely to eat more snack foods overall on a daily basis, including evening snacking, and those snack foods were more likely to be higher in calories and lower in nutritional value.

Looking a bit deeper than a first glance, there is logic in reaching for a high calorie low nutrient food when you aren’t getting enough sleep. A simple-carbohydrate or high sugar food offers a quick burst of energy when feeling tired from a lack of sleep. That quick-fix snack craving may be in response to the sleep deprived body’s nagging need for energy to meet the day’s demands. Plus, those not getting enough sleep are also awake for more hours of the day, leaving more time available to snack, so it makes sense that they’d consume a higher quantity of snacks.

Most people are familiar with the calorie implications of nighttime snacking. If you eat a lot before bed, you’re not burning those calories off the way you do when you eat during the day. Nighttime snacking is often a part of sedentary activities, such as watching television, prowling the internet or scrolling on the mobile phone. However, the connections between regular snacking at night and struggles with weight go deeper than just taking in an excess of unhealthy calories during a lengthy sedentary period.

Evolutionarily, your body is set up to eat and digest efficiently during your waking hours to fuel activity. Nighttime eating can be disruptive to glucose levels, insulin functioning and digestion. That disruption can also impact sleep quality and contribute to an increased risk of developing obesity, type two diabetes, cardiovascular disease and metabolic disorders.

Avoid Night Snacking With Healthier Food at the Right Times 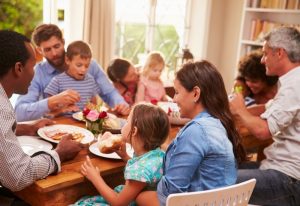 Avoiding night snacking is easier if you eat better during the day, when you are active. Eat nourishing meals of whole foods. Choose complex carbohydrates over simple, sugary carbs, helping to make sure to get enough fiber, which will help you to feel fuller. Try to get the bulk of your calories in the earlier part of the day. Eat an evening meal focused on more on protein than carbohydrates about three to four hours before bedtime.

Setting meal times will help train your body out of the night snacking habit. Eating at the right times of day with an 8-12 hour overnight fast will help control weight, encourage fat burning and is better for circadian rhythm health. And, when you eat, don’t do it in front of a screen. Instead, savor and enjoy your food. You’ll also be more aware of satiety, when you’ve had enough.

You’ll get better sleep if you wake up and go to sleep at the same times each day. Don’t short change yourself on sleep. Allow for 30-60 minutes of wind down time in addition to sufficient sleeping time. Make your sleeping area as comfortable as possible and leave the electronics, including your phone, outside of your bedroom. Avoid bright lights in the evening, but get plenty of morning light exposure. That helps keep your circadian rhythm at its best, which helps to improve sleep quality.