Sleep-Related Eating Disorder, or SRED, is a parasomnia that causes a person to prepare and eat meals while asleep.

When trying to lose weight, some people just can’t seem to get a handle on it no matter how hard they try. The reason for certain unique cases was hard to understand until it was discovered that the subjects frequently raided the refrigerator at night. It was even more difficult to find out the cause when there was no recall of it in the morning. The name of this rather new eating disorder is called Sleep-Related Eating Disorder.

Eating Up to 50 Percent of Calories While Asleep

People who eat in their sleep will vary somewhat in their actions. The action is similar to sleepwalking, except that sufferers do not do anything except eat and then go back to bed. The amount that they eat can be considerable, sometimes even accounting for 50 percent or more of their caloric intake for the day. Generally, people with SRED tend to get up and eat at least once a night, but some will do it more often.

A characteristic of the foods eaten at night is that they tend to be high in calories. It is quite possible that the people engaging in night eating would not wish to be seen eating those foods in public, and they often eat them faster than they would if awake. 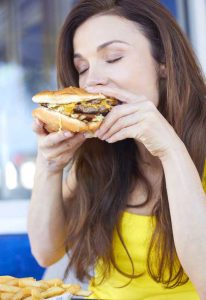 Cases of SRED are often seen in those who have problems with other eating disorders, such as anorexia or bulimia. It also seems to have a genetic base behind it because it can run in families.

Both men and women can get the disorder, but it is more common in women, with about 65 to 80 percent of sufferers being women. It normally occurs among adults who are between the ages of 22 to 29 years old. Other issues that may be related include a history of drug abuse or alcoholism, and other sleep disorders may be present. About 50 percent of those who develop SRED already had some sort of parasomnia, with most being sleepwalkers when they were younger. Researchers believe that this may be because of a problem with their circadian rhythm, or 24-hour internal clock.

Dieters are at risk, too. Cutting back on foods they like during the day may produce enough stress to induce SRED at night.

While not always a concern, it seems that some people with SRED may eat things that are unhealthy, and possibly even poisonous. They have been seen to eat such things as dog food, coffee grounds and even cleaning solutions. Because they often are only half conscious while preparing their food, the risk of causing harm to themselves or others is high.  Possible dangers include accidentally cutting or burning themselves, or possibly starting a fire. Apart from these problems, diabetics may also eat food that is heavily laden with sugars, causing a spike in their blood sugar.

Discovery of the Problem

People that have SRED are often not aware of it. Family members may notice it and tell them. If someone with the disorder lives alone, they may discover it when they wake the next day and find that their kitchen is a mess. Sometimes this can bring back the memory of it. The individual may also wake up in the morning with problems of:

Two other things that might clue them in are that they may not be hungry in the morning for breakfast, or that they find themselves rapidly gaining weight with no other explanation.

Diagnosis of an SRED

The process of diagnosis starts with an interview. Afterwards, the individual may need to spend a night in a sleep lab for monitoring.

A doctor will want to know the history of the eating binges and will likely ask for a sleep diary. In addition, the doctor may look for: 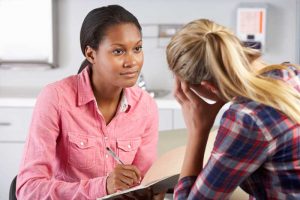 After the diagnosis, the treatment will begin. Medication may be used, but this tends to make it more dangerous for patients because it may make it easier for them to hurt themselves. Methods to reduce stress and anxiety may also be used.  These may include:

Treatment is also likely to include ensuring that you get enough sleep nightly. Short nights tend to increase the nightly episodes. Current medications may also need to be changed to ensure that they are not causing the SRED.

In many cases, when the problem that led to the onset of SRED is successfully dealt with, the SRED will disappear. Doctors may also look for and treat any existing circadian sleep disorders. Recent research has found that there is a connection between an individual’s sleep patterns and metabolic dysregulation, which means that a person’s biological clock has become imbalanced. The connection between SRED and chronobiology are being researched by labs today, such as the one at Northwestern.

Because of the potential for harm while walking in a semi-conscious state, there are some precautions that should be taken to reduce the likelihood of an injury for those with the sleep-related eating disorder. Making sure that the pathway to the kitchen is clear is important to eliminate falls. Unhealthy substances, such as cleaning agents, should be removed from the kitchen.

Sleep-related eating disorder, although not usually deadly, can still be deleterious to your health. If you or a loved one are experiencing any symptoms associated with SRED, talk to a doctor about your options.