As we age, our cognitive abilities decline. While some people remain mentally fit into old age, others suffer from severe memory impairments. Accounting for around two thirds of all cases, Alzheimer’s is the most common form of dementia, which is associated with a loss of cognitive abilities. According to recent research, as little as six minutes of intense exercise could delay the onset of Alzheimer’s disease.

How Alzheimer´s Affects the Brain 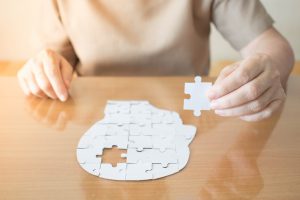 Special nerve cells in our brain ensure the functioning transmission of information so that we can perform highly complex tasks on a daily basis. In people with dementia, the function of some nerve cells is increasingly lost so that they are no longer able to communicate properly with each other. Possible causes for this include deposits of certain proteins in the brain, e.g. amyloid plaques and tau fibrils, which cannot be broken down by the body. As a result of the dysfunctions, memory and orientation disorders, disturbances of language, thinking and judgement as well as personality changes occur. Once nerve cells have been lost, they can only be replaced with great difficulty, if at all. Unfortunately, there is still no cure for this debilitating condition, but researchers are looking for new ways to slow the disease’s progression. New research published in the Journal of Physiology suggests that high-intensity exercise increases the lifespan of a healthy brain and delays the onset of neurodegenerative diseases like Alzheimer’s and Parkinson’s.

The scientists found that short but intense cycling increases the production of a specialized protein that is important for learning and memory and may protect the brain from cognitive decline. This protein is the growth factor BDNF (brain-derived neurotrophic factor), which promotes neuroplasticity (the brain’s ability to form new connections and pathways) and the survival of neurons. Animal studies have shown that an increase in this protein stimulates the formation and storage of memories, increases learning ability and improves cognitive performance. To distinguish the influence of fasting and exercise on BDNF production, researchers at the University of Otago, New Zealand, compared the following factors:

They found that short but intense exercise was the best strategy for increasing BDNF compared to a day of fasting with or without a longer session of light exercise. BDNF increased four- to five-fold compared to fasting (no change in BDNF concentration) or prolonged activity. Although the reasons for these differences are not yet clear and need further investigation, the experts say the observed increase in BDNF during exercise could be due to the increased number of platelets (the smallest blood cells), which store large amounts of BDNF. The concentration of platelets circulating in the blood is more affected by exercise than by fasting. More research is underway to delve deeper into the effects of calorie restriction and exercise to differentiate the impact on BDNF and cognitive benefits.

Previous research has shown that exercise can improve brain function and reduce or prevent the onset of neurodegenerative diseases. Research has found that exercise-induced activation of peripheral systems such as muscle, gut, liver, and adipose tissue can affect neural plasticity.

Cathepsin B (CTSB), a myokine, and brain-derived neurotrophic factor (BNDF) have been found to have robust neuroprotective effects. In one study, researchers looked at whether increasing aerobic exercise intensity would increase the amount of CTSB and BDNF circulating in the blood. The subjects completed intensive training on the treadmill. When they measured CTSB and BDNF levels, the experts found that exercise increased circulating CTSB in young adults immediately after exercise. They also concluded that CTSB may play a role in cognitive control by modulating processing speed, and that both moderate and high-intensity interval exercise increase serum BDNF levels and working memory performance in young adult women. Although more research is needed to understand the exact mechanisms involved in this process, these proteins are promising therapeutic targets that could delay the onset and progression of cognitive impairment.

Researchers at Tsukuba University found that although HIIT covered only about a third the distance compared to endurance training, both types of training produced similar improvements in exercise capacity and brain function. In experiments on rats, they found that both endurance running and HIIT resulted in weight loss, greater muscle mass, and the ability to exercise longer compared to controls; Rats in both groups showed better memory for spatial learning experiments. Increased cell development – ​​neurogenesis – was also observed in the hippocampus with both forms of stress. However, levels of a signaling protein that promotes neurogenesis (BDNF) were increased by HIIT but not by endurance running.

The Benefits of HIIT Training

But what exactly is HIIT training? HIIT training is very popular with fitness lovers. A highly intensive active phase always alternates with moderate phases or active breaks. Typically, an intense sprint or other intense exercise is performed for 15 to 60 seconds, followed by a rest period of around 10 to 30 seconds before moving on to the next high-intensity phase. As studies have shown, high-intensity exercise can improve brain performance; however, this type of training has also other advantages: With the help of HIIT, endurance is improved, fat burning is greatly increased and muscle mass is built up. The cardiovascular system also benefits. In fact, HIIT increases peak oxygen consumption. Increased peak VO2 is associated with longer life and a healthier heart.

How Poor Sleep Ages You

It seems that the more we learn about sleep, the more we realize just how tightly entwined... [Read More][weiterlesen]

Are Night Owls More Likely to Suffer From Anxiety?

As chronobiology has increased understanding of the role of timing and biological rhythms ... [Read More][weiterlesen]