Just south of Germany’s Rhön Mountains, situated on the banks of the Franconian Saale River, lies a beautiful spa town with lush green pastures, beautiful architecture and countless medicinal springs. This town, Bad Kissingen, has hosted spa guests and been a favorite getaway of the European aristocracy since as early as the 16th century. Today, Bad Kissingen is a world-famous health resort, known for its serene elegance and frequented by nearly 250,000 people annually. In 2021, Bad Kissingen’s famous mineral springs and architecture earned its inclusion in the UNESCO World Heritage Site “Great Spa Towns of Europe.”

What separates this German spa town from the others throughout Europe is what is known as the ChronoCity project; its commitment to finding various ways to weave chronobiology into the fabric of their society, essentially becoming the first “ChronoCity” in the world.

Chronobiology is a science that studies how our internal body clocks interact with the earth’s natural cycles and time cues in the environment. According to chronobiology, every human being has an attribute known as a “chronotype” that reflects the timing of his or her natural sleep-wake cycle and the times of day at which activity levels and various body functions are at their highest.

The physical functions that are affected by an individual’s chronotype include hormone levels, body temperature, cognitive function, organ function, sleep and more. Maintaining a daily schedule that is not aligned with one’s personal chronotype can lead to a myriad of health problems, including obesity, depression and even cancer.

Although one’s chronotype governs many different biological functions, it has traditionally been determined based solely on sleeping habits, labeling people as either “larks,” (those who wake up early in the morning and are most alert in the first part of the day) or “owls” (those who are most alert in the late evening hours and often go to bed very late). In more recent years, sleep specialists have expanded the range of chronotypes to four distinct categories — bears, wolves, lions and dolphins — to more accurately pinpoint specific sleep-wake patterns.

Bad Kissingen’s ChronoCity project, led by Dr. Thomas Kantermann of the University of Groningen in the Netherlands, endeavors to apply the principles of chronobiology, including the idea of chronotypes, to everyday life, restructuring civic life around the importance of sleep and a healthy circadian rhythm. Originally outlined in late 2013, this urban design project utilized the latest findings in chronobiology to come up with a “blueprint for future urban design.”

In the effort to reinvent Bad Kissingen as a ChronoCity, the goal was to address problems related to lack of sleep by looking at both the behavioral and environmental causes of sleep disturbance and circadian rhythm disruption. At the same time, mass amounts of sleep data would be gathered for the whole town in order to better meet the citizens’ needs.

Despite the challenges, Bad Kissingen has been extremely successful in translating the latest in chronobiology research into practical changes towards better harmonizing the environment with residents’ natural sleep needs. The transformation of Bad Kissingen into the world’s first ChronoCity has involved implementing several changes to better promote citizens’ health and happiness.

In addition to re-examining school and work times, businesses are encouraged to offer employees flexible hours so that they may work at the times of day when they are at their most productive. Much thought has been put into lighting in public spaces and buildings and it has even been suggested that the town split from the rest of Germany, abolishing daylight saving time (DST).

Because their circadian rhythms naturally run a bit later than adults, adolescents are at the greatest risk of their natural rhythms being out of alignment with their daily schedules. This can lead to health concerns, as well as lower levels of concentration and alertness during school hours, which can ultimately affect performance. One of Bad Kissingen’s earliest adopters of the ChronoCity idea, the local secondary school, immediately polled students to get their opinion on the best school start time. After also determining each student’s chronotype, the amount of social jetlag students were suffering each week was calculated. All of this was taken into account in the decision to delay school start times, a move that resulted in more sleep each night for students as well as an increase in their desire to participate in daily activities.

Also helpful to the expeditious implementation of the ChronoCity project was the fact that the mayor, as well as the town council, backed the project, which undoubtedly helped in jumpstarting its progress. In fact, the mayor named Dr. Kantermann the “Chief Scientific Officer” on the project and signed a letter expressing his intent to help in gathering results that can be considered directly applicable to the living, education, work, wellbeing, health, mobility and sleep of his townspeople.

With the ChronoCity project, Bad Kissingen became the world’s first role model for other cities in optimizing the health of its citizens through chronobiology (and other sleep science), while improving citizens’ overall day-to-day happiness and productivity.

According to Dr. Kantermann, every individual has their own unique chronotype. There are countless different chronotypes and living outside of one’s chronotype can be hazardous to one’s health. Furthermore, living outside of one’s preferred sleep pattern actually promotes medical issues such as depression, obesity and even several forms of cancer. With all of the benefits that come with living within one’s preferred sleep pattern, why is it that so many people have difficulty doing it?

Living a modern lifestyle includes early mornings, long work shifts, late nights and being exposed to artificial lighting. All of these make living with the optimum sleep cycle quite difficult. In truth, most people are neither morning nor evening types but lie somewhere in between. This has led modern sleep experts to expand the chronotypes to four distinct patterns, symbolized by the bear, wolf, lion and dolphin. Although it’s possible to fall anywhere along the chronotype spectrum, according to most research, 50 percent of people edge closer to being morning types while the other 50 percent fall closer to being evening types.

Those who share a chronotype, whether they are a morning type or evening type, have similar activity-pattern timing. In other words, people who share a chronotype usually sleep, work, exercise and eat around the same time of day or night. Research has concluded that chronotypes are completely independent of one’s ethnicity, gender and socioeconomic status. This means that every individual has a distinct chronotype, but its origin remains a mystery. 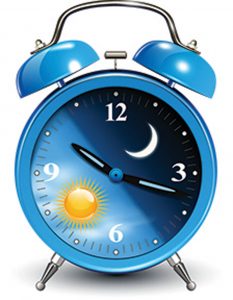 On average, people sleep for about 30 percent of their lives. Although we spend so much time sleeping, we do not totally understand why we need it. What is understood is that if we do not get enough sleep, bad effects like poor memory, obesity, depression and cancer can happen.

According to Kantermann, “The introduction of artificial lighting and the restructuring of working hours has progressively detached our species from the 24-hour cycle of light and dark…At best we tolerate the fact that we need to sleep, and at worst we think of sleep as an illness that needs a cure.”

Our bodies do not react as resolutely to artificial light as they do to natural light, so a society built on electrical light (like the society we live in) results in more evening-type chronotypes than societies that are more reliant on sunshine. Yet, the fluorescent lights in the typical office building cater more to the likes of those with morning type chronotypes.

It is hoped that more can be discovered and better understood about these mysteries of sleep and Dr. Thomas Kantermann has been a driving force in this respect by making Bad Kissingen our world’s first ChronoCity.